What do the counters tell us?

Counters will allow you to monitor the performance of each device, such as voltage, GPS fix time, upload time, etc. If certain trends are seen, such as an increased Failed GPS Fixes, this allows the user to determine if certain parameters, such as GPS Settings, will need to be modified. 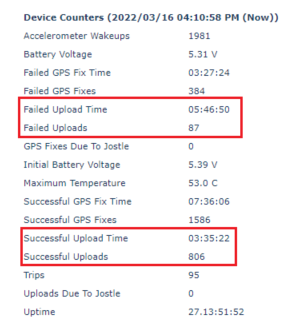 Where are the counters found?

Device Counters can be found via:

This will open a new window. The device counters can be found at the bottom of the details section.

Historical counter values will appear in the Device Logs

However the format is not as readable as in the Device Details Section: