The device firmware update process is as below:

Then, when the device next connects in:

2. Device sends Hello message to OEM
3. Device uploads data
4. End server responds with the commit response, to say data has been successfully received.
5. Device does a 'slot check' and syncs up any pending firmware or parameter updates

In some circumstances we may see a firmware update not getting through after a connection.

If the device is not committing:

We must resolve this, then the update will get through. The FW update is not preventing the commit, instead the failure to commit is preventing the firmware update. We are failing at step 4 above and not proceeding to 5.

See Since Committed/Since Connected and Troubleshooting and rectify the issue with the data not getting to the end server.

Device can commit OK - next steps

On occasion, the device will be connecting/committing OK but the FW still does not update.

This is due to the firmware no longer being active on OEM.
Sometimes, Digital Matter deactivate older versions for various reasons - such as they aren't able to be downgraded.
The firmware being 'stuck' does not cause problems with the device. The device simply finds the FW it is trying to pull down from OEM is inactive, and skips the update.

Update the device to the latest firmware. In this example, 1.14 not being in the list (and only 1.16) is our indicator that this was the issue (1.14 is inactive) 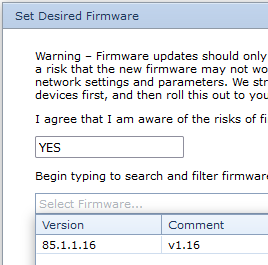