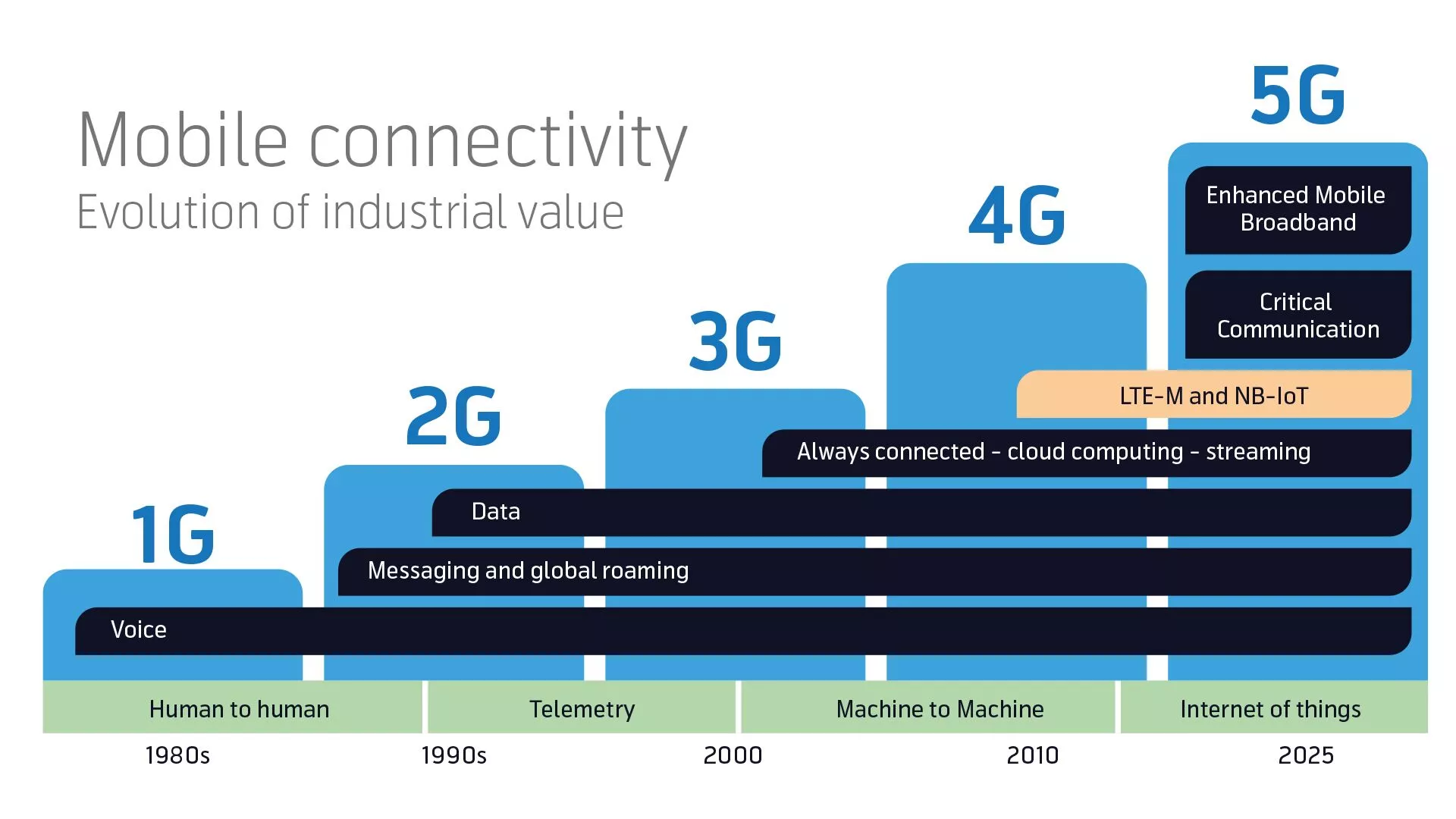 Image: From 2G to 5G: The history of mobile connectivity

The GSMA provide an up to date list of what networks different mobile network operators have deployed.GSMA - Mobile IoT Launches

As expected, the landscape has changed dramatically since then, even in 2021/2022 we have seen significant changes:

LTE-M and NB-IoT are quite similar, either technology will work well for most applications. There are some differences which mean for some applications, one option may have a slight edge. There is no outright 'better' or 'worse' - the networks can be selected to suit the application - or more often than not, selection is dictated by which technology is available in the area.

Digital Matter's early experience with both LTE-M vs NB-IoT has shown LTE-M to be more mature and better supported.

In recent years, the landscape has changed dramatically. Early on, it was difficult to even get online on many NB-IoT networks, and using a roaming SIM on these networks was out of the question.

This is no longer the case and we have seen many NB-IoT success stories of late.

Digital Matter current confidence levels can be summarised as:

LTE-M1 on SIM's home network
Highly confident, well proven
LTE-M, with a roaming SIM
Confident, well proven over many years.
It is important to apply the relevant APN and bandmasks for best performance - see: SIM Providers & Setup
Some roaming SIMs will cause significant extra battery drain, and should be avoided if using battery powered devices. See Roaming SIM Cards - Battery Life Impact
NB-IoT, Home network SIM
Confident, well proven.
In general, NB-IoT networks are 'younger' than LTE-M in many regions, so some minor teething issues (which have since been resolved for LTE-M) may remain on certain NB-IoT networks. However issues are fast becoming few and far betweween.
NB-IoT, with a roaming SIM
Confident - this has improved greatly over the last 12 months. As above some roaming SIMs should not be used in battery powered devices.

NB-IoT was enhanced as part of 3GPP Release 14 - the new NB2 feature has brought improvements to the way devices connect to the network and throughput.

In our testing, we noted that for an NB-IoT device, when changing towers - small increases in transmission delay were observed, but the device retained their connection to the server. It is a common misconception with NB-IoT that devices need to re-establish their connection to the server every time they swap cells, resulting in transmission delays of up to one minute. The results show that this is not the case.

Both networks provide excellent range and penetration, particularly when compared to 3G or 2G networks. NB-IoT has a slight advantage over LTE-M, making NB-IoT a good choice for assets potentially indoors, in basements etc.

Early on, LTE-M networks were the first to be set up. They are well established globally. In the last couple of years, NB-IoT deployments have caught up, and may outpace LTE-M in future.

For most applications, either technology will work perfectly well. If you have either network, you can get online with DM devices. Check pricing plans and select the option which provides best value.

I want to use Digital Matter devices in my country, what do I do to get connected?

We produce devices which utilise a variety of networks:

To see whether LTE-M/NB-IoT will be suitable,

Getting Connected - the tricky bits

You may be used to setting APNs on devices in order to get them online. APN stands for Access Point Name. The APN provides the device with all the information that it needs to connect to the network - e.g which ports to use, what IP address etc.

On our 2G and 3G devices, a list of APNs is stored in device FW. When a SIM is inserted, it reports its IMSI - International Mobile Subscriber Identity. Then if there is an APN against this IMSI this is used and the device can join the network. If the right APN isn't in the list, it needs to be set. This can be done via SMS easily on 2G and 3G, as SMSes can be received even if the device isn't connected to the network.

On our 4G devices, we also have the Auto-APN feature, where a device will automatically detect the settings to use. Typically most devices come online with most SIMs without any input. On top of this, when specific SIM cards are detected, we apply the best possible modem settings (as advised by the mobile networks) to allow for the best connection speeds. However not every network is the same, and sometimes APNs and network settings need to be applied manually.

4G networks networks use a flat architecture where all communication is sent via the data network - so the device must be online to receive an SMS. This makes setting an APN directly via SMS impossible! We have developed other methods to achieve this which are covered here:4G APN - How do I set the APN so I can get connected to the network?

The issue is that if you do not have access to the device and it won't connect - settings can't be changed to rectify the situation without retrieving the device. This can make roaming difficult. The solution is to test thoroughly!

Roaming on LTE-M and NB-IoT - Do DM devices roam?

Digital Matter devices are able to roam between countries and join different networks. There is nothing specific to the device which will enable/prevent this. It is typically down to whether or not the SIM card in the device can successfully attach to various networks in different countries. That being said, there are some issues with roaming.

There are still many countries around the world (particularly developing countries) which do not have 4G LTE-M or NB-IoT coverage, and may not for some time.

On top of this, given how new the networks are, many operators are still getting roaming agreements in place. 2G and 3G networks have been long established so this has all been put in place.

While a SIM card may be able to roam to multiple countries and use networks in these locations, the specific mobile networks may require advanced or specific configuration in regards to what APN is set, and what LTE bands the devices connect on. This is hard to manage if each country requires a different set up, as then we cannot use the same set up to ensure connectivity is maintained in all countries.

In general, it is a good idea to set the APN explicitly in parameters for a roaming SIM - even if it can get online without doing so - 4G APN - How do I set the APN to connect to the network?

Some roaming SIM cards trigger the device to regularly turn on it's modem, and scan for extended periods of time to search for a 'home' network. This is a setting set on the SIM, and can't be worked around/turned off via device parameters.

These scans significantly increase battery drain. With some worst-case examples using approximately 10% of device battery per month, just on the SIM-controlled network scanning. Some SIM cards are better 'behaved' than others and do not cause excessive battery drain.

So what's the bottom line?